These come to us via Kroothawk over at Dakka.

However there are rumours that a release of models is coming very soon. (Harry)

There are no rumours of a book at all. Just a wave of models.

Some BIG , gribbly monster type thing. (Not a mammoth. Not a Greater Daemon). Nurgle specific? (Harry)

Herald of Slaanesh on chariot been spotted in warehouses.(Silvertounge)

Soulgrinders in fantasy. Massive rectangle base. (Erazmuz_M_Wattle) This must be the big thing on a monster base I heard about. I wasn’t expecting a soul grinder … Nurgle speciific thing was (clearly)my incorrect assumption. (Harry)

This just in from Rixitotal who has read next months White Dwarf:

“So in next months white dwarf there is going to be a leaflet with updates for Codex daemons and daemons in fantasy.

Some changes to old units, flamers are now only S4 in fantasy and some units have had point changes. ect.

Also new units slannesh massive chariot (2D6 +1 impact hits) and other weird chariot thing in 1 kit. the other thing looks and acts kind of like a mobile meat lawnmower. This is in both games and acts like a chariot in 40K.

Soul grinders are coming to fantasy! has T7 6 wounds and a load of upgrades for its shooting. looks pretty mental.

The model (40K kit) in the white dwarf and leaflet was on the same base as the giant goblin spider.

Screamers (look similar but with lots of eyes),

Nurgalings (looks like a pile of funny little germ monsters you might get in a dish washer advert).

More confirmation of this and some more details from my inbox:

Chariot kit has two builds. One has four daemonettes and a herald called an exalted with a big whip. The other build has the exalted on her own but the chariot is dragging spiked / bladed rollers behind it.

Soul grinders comes on the same base as the Arachnarok spider. Shooting attacks. One attack works like grape shot but can be upgraded. Another works like a stone thrower.

Blue Scribes gets a mini. More Dais than disc.

Well it looks Like August new releases are all Daemons.

Further Down The road:

All 4 greater Deamons will get plastic kits (with head/weapon options plus wfb/40k specific bits on sprues) and that there will be “resin conversion packs” to make “named greater Deamons”. (Hastings) No idea of timescales on this. I am not expecting them to arrive together Or with this wave. (Harry)

Jes Goodwin is rumoured to be doing the Bloodthirster. No timescale for this. (NatTreehouse) 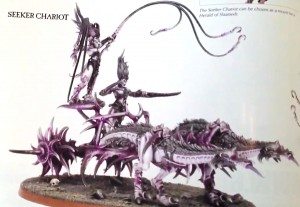 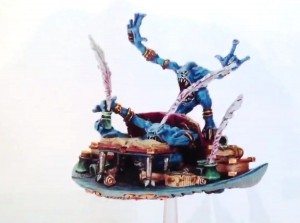 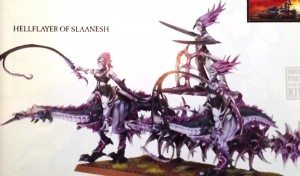 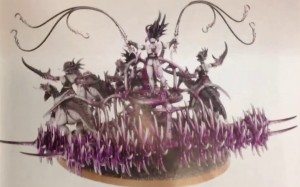 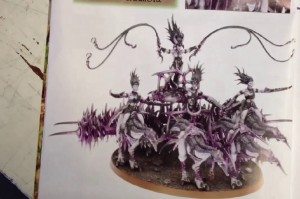 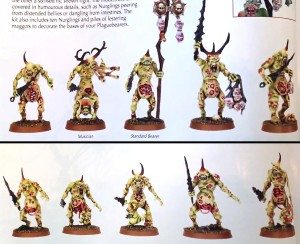