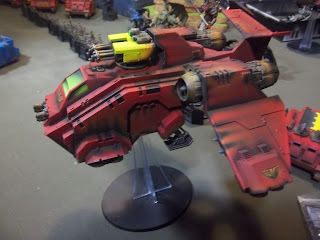 This is a guest article by Black Blow Fly’s friend Dave Boucher who is a fellow 40k Wrecking Crew member.

We have all heard the Internet clamoring that vehicles have been hit by the NERF bat in 40k6. This is both true and false for more reasons than I will describe here. Today I will describe cover and what it means for vehicles in 40k6 as it has changed in many different ways.

First let’s look at the cover rules on pages 74 and 75, most importantly the first bullet:

At least 25 percent of the facing of the vehicle that is being targeted (it’s front, side, or rear) needs to be hidden by intervening terrain or models from the point of view of the firer for the vehicle to be in cover.

Let’s take a few looks at what constitutes 25 percent being in cover: 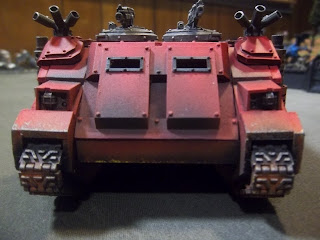 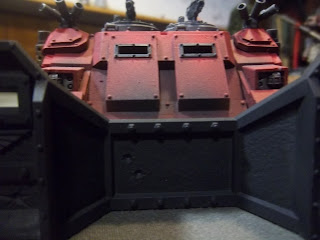 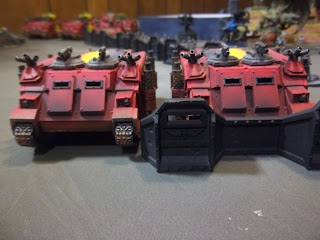 We see that the Aegis defense line can easily hide 25 percent of a rhino and it provides a 4+ cover save to boot. So a 50 point investment gets your vehicles good cover.

Now lets look at my favorite part of the text I referenced above – At least 25 percent of the facing of the vehicle that is targeted (its front, side, or rear) needs to be hidden by intervening terrain or models from the point of view of the firer for the vehicle to be in cover. 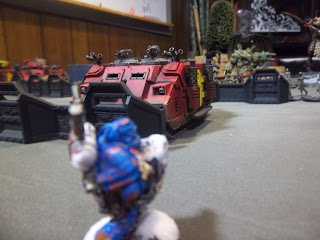 The Interceptor has a clear view of the side armor in this picture. In 40k5 this would mean that the tank had no cover, however this is 40k6. All we can consider now is the facing being shot. 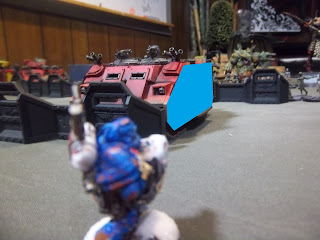 In this second picture the side armor is is blocked out in blue, giving us a visual aid to show us only the front armor which is clearly 25 percent obscured.

Next we need to take a look at how Armor Facings works in 40k6 compared to 40k5. Let’s start with the 40k5 Armor Facing Diagram. 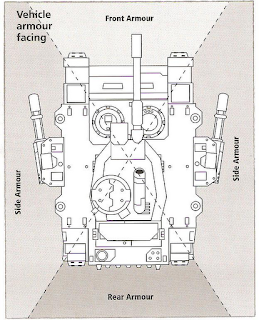 In 40k5 we drew lines from one corner to next, or as the INAT ruled, we make a cross at the center and have 90 degree facings from the center point. If you notice parts of the top of the vehicle are included in each facing. 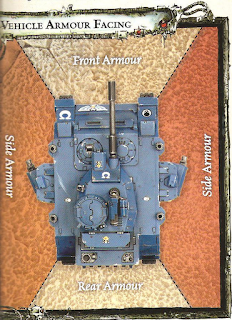 Now if we look at the 40k6 diagram we notice one big change other than the fact that it is in color. The lines do not intersect in the middle of the vehicle. Page 73, where the diagram is in the book, does clarify the issue on how to determine which facing it is by drawing the lines through the corners. However in the this diagram the top of the vehicle is not included in any of the facings. The reason for this change I can only guess is to prevent flyers from completely dominating other vehicles.

Let’s take a look at fliers shooting at vehicles: 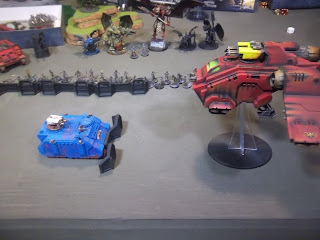 At first glance it would appear that the Aegis defense line is not big enough to give the razorback any cover. 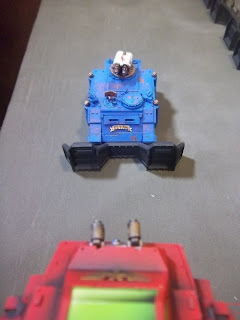 From the view of the Stormraven itself it again looks like no cover is provided, but that is because we still see things from a 40k5 point of view: 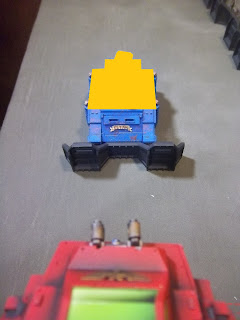 When we block the top part of the razorback out, like in the the other picture, we now see that the Aegis defense line does in fact still provide 25 percent cover. So obviously the cover rules have changed. Vehicles now almost always get a cover save. Cover may only be 5+ most of the time, but getting it always gives vehicles back some survivability that was lost from losing 4+ cover and gaining Hull Points.

I hope I enlightened some of you on these rules.

A big thanks to Dave for a great article !!