GW, why do you hate tournaments?

Here is the revised draft, thanks to everyone for their input on this, it was really helpful.

Mainly, what do you guys think about the revised missions? I tried to roll in as much of the 6th ed rules in as I felt were good for a tournament setting based on my experience, Team Zero Comp input, and your all’s suggestions.

I altered the missions to be more similar to what is in the book, added the Scouring and Big Guns Never Tire, as well as alternated the scoring method of the main Victory Conditions without a huge variation. I think this is a nice mix of tactics but still remains true to the basic principles we have found to work really well. What do you guys think?

We are going with 1500pts for these early 6th ed tournaments as we’ve found that the new rules slow the game down quite a bit, and we are sure people are going to be taking more time looking up rules, rolling up Warlord Traits, etc. and would rather have more time per round so as not to rush anyone.  As we go through the season and people get more accustomed to the game, we will start to increase the points cap.

The Bay Area Open Scenario is one we have built over a great deal of time, play testing and player feedback. It is a scenario that strives for fairness, and simplicity with multiple paths to victory. We want you to focus on playing your best game, not focusing on trying to figure out a mission you aren’t familiar with.

The Bay Area Open scenario has 3 Victory Conditions always happening simultaneously. Each is worth a varying number of Victory Points dependent upon the mission (Alpha, Beta or Gamma). There are also 3 Bonus Points per mission. The Player that earns the most Victory Points during a game, wins. If both players earn the same amount, they tie. There are no degrees of victory, if you win by 1 point or 12, it is just a win. The player packets will have a score sheet for each mission clearly showing how much each objective is worth for each game to make it easy to keep track of.

The Bay Open Scenario also uses Bonus Points in every mission. The Bonus Points are worth 1 Victory Point each and are the same for every game.

This follows the standard deployment as outlined in the book with one modification. The player going first reduces their deployment zone by 12” along the long edge on one side. The player going second does the same along the opposite edge. This results in a deployment zone that is 24” out from the short board edge, and 36” up the short board edge. Note, objectives may not be placed in the gap space. Outflankers arrive via long table edges, with the roll of a 1-2 being the long edge nearest the owning player, a 3-4 being the opposite, and a 5-6 being the owning player’s choice. 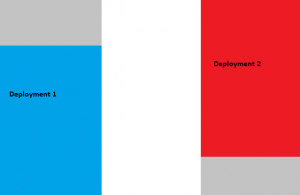 We use Swiss Pairings, meaning that players with the same record play each other. Pairings within a bracket are randomly determined first round (friends and club mates can request not to play each other first round) and then by strength of schedule thereafter. For final rankings, the field will be stratified by accumulated Victory Points.

There will be no comp scores at this event. We feel that the game has an inbuilt comp system with the rulebooks and Codices. We do not feel that a second, player created level of comp is necessary. So bring whatever army you want to play!

1. Your opponent was 15 or more minutes late to the round.

3. Your opponent intentionally cheated. Be prepared to support your case to a judge.

4. Your opponent slow played. We define slow playing as not completing 4 game turns of play. In the case of 20 or less minutes left to play, divide the time remaining between players to complete one full GAME turn. Time each other during this period to ensure that each player has an equal amount of time to complete a full game turn. If one player does not finish within their limit, the other player can force them to stop and then begin their turn. This mechanic is in place to ensure no one is slow played out of a turn of play.

1. You argued over rules with your opponent.

2. Your opponent beat you.

A negative mark on sportsmanship will be met with administrative action as follows:

1. First thumbs down: A verbal warning from a judge, up to reversing a win to a loss.

2. Second thumbs down: Reversing a win to a loss, up to disqualification from any prize support.

3. Third thumbs down: disqualification from any prize support, up to expulsion from the event with no refund of the ticket price.

4. Fourth thumbs down: Expulsion from the event with no refund of the ticket price.

All models are expected to be WYSIWYG as much as is reasonable. Proxies are not permitted. Counts As armies with counts as allies will only be permitted if they represent a clearly concerted effort to build a unique army around an obvious theme. For example, an Adeptus Mechanicus army using extensive kit bashing and conversions will be fine. If you go this route, YOU ARE REQUIRED TO HAVE A HANDOUT TO SHOW YOUR OPPONENT THAT SHOWS WHAT EACH UNIT IN YOUR ARMY IS ALONG WITH ITS STATS AND PERTENANT RULES! You must also present this to them prior to the game so that they have time to understand what they are playing against. There will be no exceptions to this.

Terrain will be prearranged and laid out by the TO’s prior to the event. We will not be using terrain placement rules per the book as it is too time restrictive. If you come to a table and feel that it is not sufficiently or fairly arranged, or that it may have been moved by the previous players, alert a TO who will arrange the terrain appropriately.

Mysterious Terrain: Will not be used.

Hills: All hills are open terrain, granting cover via LOS blocking/interference as normal.

Barriers: All barriers grant cover per the book and are not considered to be Aegis Defense lines unless they were purchased and placed by a player.

Buildings/ruins: All buildings and ruins are assumed to have a ladder or other means for moving up and down. Rules in the Rule Book will be used for Ruins and Buildings.

All other terrain functions as outlined in the book.