Gaming as an Adult Part 1: Keeping Your Spouse Happy

You are here: Home › Editorial › Gaming as an Adult Part 1: Keeping Your Spouse Happy 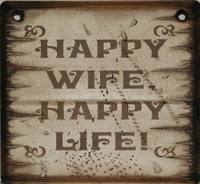 By Chris Smith a.k.a. Ozymandias

I am now officially old. The receding hairline and expanding waist line were hints, but it was only a few days ago that it became official. I hit the big Three-Oh (all of the 40-plus gamers reading this are now rolling their eyes at me). This trend toward adulthood has been happening for a while now. I’m married and have a mortgage, but no kids yet, though I’m sure that milestone will be here soon. And I am also a gamer, have been now for more than half my life.

It used to be easy to find time for gaming. My friends and I would stay up all night playing game after game of Warhammer 40K (it was 2nd edition back then), playing Axis and Allies (which literally took all night and the next day to finish), and whatever video game had just come out. As an adult, I am lucky if I get one night a week to game with my friends.

Lately though, I have been making an effort to not only game more, but smarter and more efficiently, and most importantly, with less marital strife. Here are some of my tips for adult gamers to do the same.

First, pick a regular night of the week to game and stick to it! This may seem obvious, but if every Thursday (for example) is your gaming night, then friends, family, and significant others know what your plan is. If you can coordinate this night with a night that your wife/girlfriend/S.O. is also busy, then you are golden (unless you have kids, then one of you needs to be home to watch the rug rats). Without a regular night, you will find yourself with something that has to be done just about every night and before you know it, three weeks have gone by without a gaming fix. Plus, a regular night gives her an opportunity to plan something with her friends as she knows you are busy.

Once you have established a regular game night, the best way to keep that night is to make sure you get home when you say you will. My wife knew I was a gamer when she married me, so it is not a surprise to her that I go out every week to game. However, nothing causes arguments about my gaming habits more than when I say I’ll be home by 11 and I actually get in after Midnight. It doesn’t matter that I lost track of time, or that my opponent took forever to take their turns, all that matters is that I was an hour late. So if you want to keep your S.O. happy, sometimes it is as easy as being home when you say you will.

To keep your S.O. even more happy, find a way to engage her in your hobby or gametime. My wife won’t touch miniature gaming with a 10 foot pole, but she loves board games and even roleplaying games. Now, while I enjoy D&D, it isn’t my favorite, but if it gets me another night to scratch that gaming itch while my wife is having fun then it is win-win for me (plus, it doesn’t count as my one night of gaming a week). Now, not all wives or girlfriends like to play board games or roleplaying games, but maybe you can get her to help you paint that new army? Getting her invested in your hobby helps avoid conflict later on.

There are times, like when I am building a new force, that it seems every few days I am getting a package from my favorite online seller or an online bits seller. Sometimes, it’s just nice to have one of those packages be for my wife. It doesn’t really matter what it is, but when she sees package after package arriving for my little toy men, it is easy to feel left out. So guys, make sure that one of those boxes is for her and she’ll forgive the rest (just make sure you don’t accidentally give her the wrong box).

Chris Smith has been gaming for more than 15 years and happily married for nearly four. His wife is usually very supportive of his hobby approved of this post.

3 Responses to “Gaming as an Adult Part 1: Keeping Your Spouse Happy”