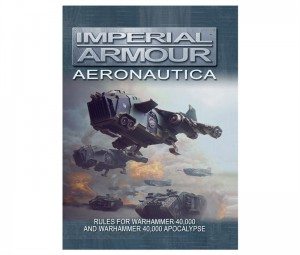 Forgeworld has released a new book, Imperial Armor Aeronautica. We got a juicy rumor to go with this!

I can’t wait to get a Vulture for my IG, what a sweet machine!

But, here is the rumor: a regular of ours talked to GW asking if he could use Forgeworld in tournaments and he told us he was told that YES HE COULD, and that a FAQ for all of the Forgeworld stuff would be released by Games Workshop (not Forgeworld) giving all the pertinent rules to allow them in regular play.

Also, he told us that Forgeworld will be releasing codices that are official and will explore some of the more niche aspects of the GW universe (the example given was a Salamanders Codex). He also said that all Forgeworld product will be sold in GW stores.

This corroborates a LOT of rumors we are hearing about Forgeworld going mainstream from multiple sources. What we hear is that GW is waiting to set up a North American production center so that they will be equiped to meet the anticipated demand that will come with letting FW into regular play.

The rest are my thoughts on this.

ABOUT TIME! We here love FW and have been pushing to get them into regular play, and now it looks like that will happen. Awesome! Hull Points mitigates a lot of the fear people had about overpowering rules, and the rest of it is just cool. The more toys the better, we say!

So wow, this means the meta will get obliterated if true. Allies and Forgeworld will just totally alter the landscape, and it will keep new releases coming out at us WAY faster than before. This also ties in with the “mini-codex” rumors I was told about as that individual also specifically mentioned Forgeworld Codices being released.

I am very excited for this! Think of how much this opens the game up, wow, it will be an entirely new landscape with so many options that literally, no two armies could be the same if you so desired. I am all for it and hope this turns out to be true.

← Board games every gamer should own
40K: Further Adventures in Wound Allocation →

19 Responses to “Forgeworld: Imperial Armor Aeronautica (And a Rumor!!!)”