Board games every gamer should own

You are here: Home › Board Games › Editorial › Board games every gamer should own

A guest article from Spireland.

Last week I wrote about how sticking to one game can rot your brain out.   While picking up a new miniatures game can be a time consuming and fiscally heavy investment a board game can be a simple way to cleanse the gaming palate.  Finding board games that you’ll want to own can be difficult as there is just a ton of games out there to pick from.  Most game stores will carry a stupefying amount of games and it’s tough to pick out something with some staying power.  I’ve been lucky, in that a member of my gaming group is addicted to board games and he brings over a new one every few weeks that I get to try.  Some of them I pick up a copy, and I’d like to share with you the games I think you may want to consider picking up.   For those already into board games, these are not deep cuts; these are the classics for those that have no idea where to start. 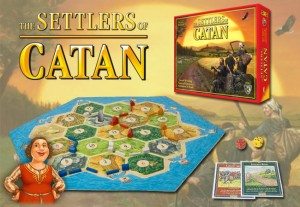 This game is a classic, for a reason.  It’s simple but still has some deep strategy. The game is popular enough that it’s seeped its way into pop culture.   It’s not very complex so that almost anyone can pick it up, though complicated enough to have some deeper strategy to it.   You are settlers to an island and are competing with your opponents for resources in order to build the largest settlement.   The game setup results in a different board every game, which means it’s easy to keep playing this game.   When you decide you are looking for more than the basic game a plethora of expansions are available, adding deeper layers of complexity to the game. 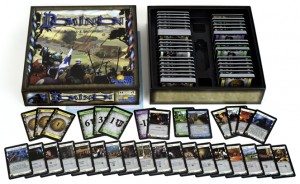 Dominion is what had been termed a “deck building game”.   In this game you take turns purchasing cards to build your deck.  It is somewhat of a resource management game as what type of cards you buy will influence how well (or not) your deck functions.   Cards that let you buy better cards are useful, though you won’t win the game with them.  Cards that will win you the game won’t be useful in building your deck.  This game is especially fun for gamers like me, played Magic The Gathering, as it’s got some of that constructed feel to it.    This is another game, like Catan, that if you want more, has many expansions.

7 Wonders is my favorite game on this list.  The reason it’s my favorite is that I have no patience, and I love drafting games.  In this game you are building a civilization through three distinct phases.  Each phase gets a random set of cards that you have to draft a card from, and pass it along.  This mechanic makes for a frustrating and engaging game that forces you to make difficult choices.  Unlike others on this list you can hammer out a game in 30 minutes, which appeals to the less patient gamers among us(like me).   Another interesting facet of this game is that there are multiple win conditions.  A player can chose to pursue a victory through science, military or building infrastructure. 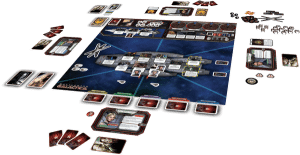 Battlestar Galatica is a game where everyone works together to try and survive cylon (evil robot dudes) attacks while trying to find a new home.  The game mirrors the popular reimagined show.   What makes this game a real gem is one player is secretly a cylon and has a different goal, to stop the other players from succeding.  The game’s mechanic for picking who (or if there even is one) is a cylon makes it so you don’t know who you can trust, leading to a very interesting gaming experience.  This is not a game if you want to work together and play nice.

Mansions of Madness is a game that is very much like a traditional RPG, in that the players compete against a game master who runs the game and the monsters inhabiting the board.  This game captures the feel of the traditional RPG version of Call of Cthulu, a very dark universe, so it can be a different experience then a game like Dungeons and Dragons.  In this game you can win, though it can be very tough.  Most likely you will go insane and murder every other player from all the crazy monsters you see.    The game includes five basic scenarios you can run though, and variants on each scenario lead to a lot of replay value.  The game does suffer from a long lead time and you have to have a player that wants to “run” the game.

There are many games out there that are worth your gaming time and dollars.  Board Game Geek is a website that collects user reviews of almost every game on the market.  Don’t trust my input, go take a look at what’s out there and find something that works for you and your group.

Posted on July 6, 2012 by Reecius in Board Games, Editorial

8 Responses to “Board games every gamer should own”