8 Reasons I Enjoy Malifaux (and You Should Too)

You are here: Home › Editorial › Malifaux › 8 Reasons I Enjoy Malifaux (and You Should Too) 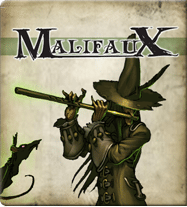 A guest article by Chris Smith a.k.a. Ozymandias.

It’s hard to remember when I first heard about Malifaux.  I remember seeing models, specifically Seamus’ Red Chapel gang, and loving the theme and aesthetic, but it wasn’t until much later that I finally took the plunge and bought my first crew: the Ortegas, an Old West family of demon hunters.

After my first couple games, I was hooked!  I still play 40K and Fantasy, but Malifaux gets me most excited to play a game.  Here are my top eight reasons why you should try it too.

Malifaux uses an old-fashioned deck of cards instead of dice.  This gives a range of 1-13 (0-14 if you include the Jokers), which turns out pretty similar to rolling 2d6.  The difference and elegance comes with hand management.  Every turn, you draw up to six cards and use these cards throughout the turn to manage your luck.  But you have to be careful, if you use the cards offensively, you may not have them when it is your turn to defend.  Managing your hand of cards is probably the most important aspect of the game and can make or break your crew.

This is where the cards really come in to play.  Almost every interaction between models takes the form of a duel.  And every duel happens basically the same way: You flip a card and add the relevant stat.  Sometimes you are testing against a target number, as in a spell or terrifying check, but most of the time this is opposed by your opponent doing the exact same thing.

I love this mechanic because whether you are shooting your opponent, striking them in melee, or casting a spell, it is all pretty much the same!  So you don’t have one ruleset for shooting, another for melee, another for vehicles, another for magic, etc.  I flip a card, my opponent flips a card, and we add our relevant stats.  Also, this keeps both players active in the game because even when I am being attacked, I am still participating.

I absolutely hate sitting around during my opponent’s turn, waiting for him to finish beating me up.  If I have time to run off to grab a cup of coffee, something is seriously wrong.

Along with the duel, alternating activations keeps me engaged in the game constantly.  I move a model, my opponent moves a model.  Then I move on to another model, and so on.   I am constantly interacting with my opponent rather than just waiting for my turn.

With the price of some games going up (I won’t mention names, but we all know who I’m talking about), for only about $50 I can have a full Malifaux crew as well as the small rulebook.  And even the most expensive model in the range doesn’t compare to the latest resin character models from some companies.

See above!  For my non-mini gaming friends, even if they wanted to play 40K or Fantasy, the price tag scares them away.  But I can get them to fork out $50 to try Malifaux.  Then, before you know it, they are expanding their collection, painting models for the first time, building terrain, and they are hooked.

Malifaux managed to pull together elements from the Old West, Victorian Horror, Dark Fairy Tales, and even Steampunk and create a compelling world for us to play in.  The genres combine in a completely unique and interesting way that makes for cinematic showdowns, epic moments, and a great narrative.

If you don’t like zombie courtesans, undead hunting cowboys, and demonic teddy bears, then I don’t know if we can be friends.  Enough said.

Finally, I wanted to end on the company itself, Wyrd Miniatures.  Rarely do we see companies so willing to engage with their fans.  They aren’t afraid to issue errata to address game imbalance, they refuse to release a product that doesn’t meet their quality standards, and most recently, they have started a summer campaign, Dead Heat, with a real prize to the winning faction.  I remember when that was the norm, rather than the exception. How refreshing.

I’d love to hear from all of you, does this make you want to start playing Malifaux? If you already play, what brought you into this game?

Posted on July 2, 2012 by Reecius in Editorial, Malifaux