Prepping for WargamesCon; an Exercise in Procrastination

You are here: Home › 40K › Editorial › Prepping for WargamesCon; an Exercise in Procrastination 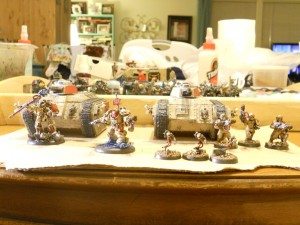 A guest article by OverwatchCNC from www.captureandcontrol.com on his upcoming trip to Austin, TX for WargamsCon!

I made a deal with my wife to go to WargamesCon way back in January.  It was actually quite a bit easier than I thought to convince her to go.  All I said was “Hey, there is this tournament in Texas put on by one of the 40k blogs.  It’s on my birthday weekend and I would like to go.”  The immediate response was “Ok let’s go.”  To which my mouth dropped, I had anticipated having to sell her on the idea; she really is a great woman.  I immediately set about putting my army in order for the main event and registering for the Mirror Match.  Since Grey Knights are my current army of choice—yes please by all means bemoan my existenc—I took my 1750 BAO list and retooled it for 2k.  Then I thought harder about it and decided my performance at the BAO (Bay Area Open) was pretty bad so let’s scrap that list and start over.

The first 2 lists I came up with were very similar and the last quite different from anything I had run in over a year with my GK. 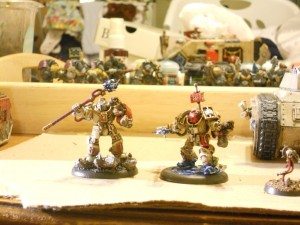 mix of other NFW, Rhino

7DCA and 3 Henchmen with Meltaguns in Chimera w/Heavy Flamer 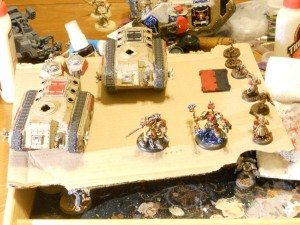 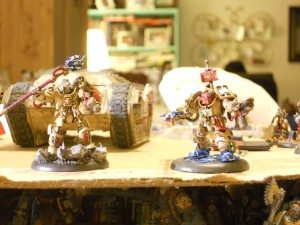 The other list replaced the Redeemer with a Godhammer.

The Odd list, the one I decided to use ultimately, took out the super expensive transports for more firepower and maneuverability.  We’ll see if it works or not!  So I had my lists drawn up and mostly built and painted.  Then life got in the way as it often does.  I had planned on attending all but 1 of the 6 local RTTs prior to WGC, I managed 3 of 6.  Not as much practice as I had hoped but that’s ok.  The real procrastination came about with the army painting and building rather than the practice matches.  Writing this on Sunday I have now put the finishing touches on the army, with 4 days to spare before my plane leaves LAX for Austin.  Not too bad, right?  Well, my mirror match army is still sitting in the boxes and on their sprues.  The only thing that keeps a huge facepalm out of my life at this moment is the fact that the Mirror Match armies have 0 painting requirement!

In prepping for WargamesCon I believe I fell prey to a few things. Editionitis as we have started calling it has set in on me.  Also, for a while, the 6th edition rumors had me pretty down on the future of 40k; notice I used the past tense because I no longer feel that way about the prospect of 6th ed.  The other thing I fell prey to was life.  Having a 16 month old, full time career, and other familial obligations that pile up between February and April makes finding time for my plastic addiction hard!  Be that as it may, I feel better prepared for WGC than I ever have for the BAO or Ard Boyz.  For both Bay Area Opens and the other larger events I have played in I have always been really prepared hobby wise but not very well prepared from the gaming side of things.  This time things are reversed and I am actually really ok with that.  I was able to test out all 3 lists several times, using multiple scenarios, and I feel really confident with what I am taking.  In the end that is really the key to preparing for any big tournament: comfort and confidence.  If you’re confident and comfortable you’ll play well, if you lack that you probably won’t.  Maybe this is why Reece has a tendency to show up to play on the 2nd day in a robe.  Don’t worry I won’t be playing in a robe, see you in Austin!

I usually show up hung over day 2, so the robe is comfortable, and I am confident it will gross out my opponent, giving me and advantage! Hahahaha! But seriously, good luck to you in Austin, I look forward to seeing you there.

A robe ehh!! Do I sense a Dark Angel army in the near future? I like the term Editionitis and wonder if I can get a Doctors certificate to take a few days off work to rectify it. Thanks for the write up, it gives me confidence that I can get my unpainted minis finished. Ohh, and how do you live with yourself playing or should I say being played by GKs? 😛

Ya, editionitis seemed to become a very relevant term about 2.5 months ago. I need a doctors note to take June 30-July 6th off to learn 6th edition…

I cry myself to sleep at night btw, but I wake up in the morning knowing that I will win all my games ever 😛 Seriously though I was tired of playing my Space Wolves and I had sold off my BA, Salamanders, IG, and Tyranids to pay Uncle Sam a hefty tax bill so my unfinished GK army was the only option.

Get some! And good luck buddy!

Thanks! I am hoping to do better than my last few GT showings.

I’m sure you will, practice makes the master!

The burning question is does the robe have fuzzy pink bunny slippers to go with it? Inquiring minds want to KNOW!

Hahaha, no, but that can be arranged!

Oh man, after your showing with the footdar, I didn’t expect to see you getting in bed with grey knights, very sad, very sad. Still, Uncle Same don’t play.

Also…you have zero excuse not to crush face now, 🙂

Does the robe hinder or enhance the d%$k tagging?

I think you might be confused. I am playing GK and wrote the article, Reece is still playing his Footdar.

I do not play GK, sir! I am offended! hahaha, no, this was a guest article, I am busting out the Footdar again.

And the robe makes Dick Tag a game that no man should play! haha