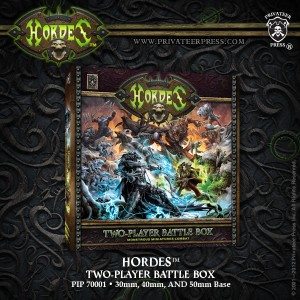 So, Privateer Press has given us the two player Battle Box for Hordes!

The Warmachine Battle Box features Khador and Menoth, and is a great bargain and an even better way to get into Warmachine. Now, we have an all plastic set for Hordes, too!

With a price point of $100 MSRP ($80 here at Frontline Gaming) this allows two people to get into the game for a very low investment. It comes with everything you need to get going, and two very cool factions: Circle and Legion.

It has the following: Complete HORDES: Primal Mk II rules in a travel-sized booklet (88 pages), an introductory guide, dice, a ruler, and 20 plastic HORDES models with corresponding stat cards.

Warmachine and Hordes are great games. Very fun, usually fast paced (some games can go on pretty long, but typically very short) with a totally different dynamic than more popular miniatures games such as 40K or Fantasy.

If you have been curious to give the game a look, this Battle Box may be a great way to give it a shot!

Posted on June 7, 2012 by Reecius in Hordes, News, Warmachine

I like this idea. Any say about when it is coming out?

It is said to be coming out in September.