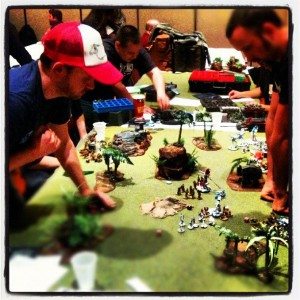 Reecius here to relate my experience at Dundracon this past weekend, which was run by Geoff from the Independent Characters Podcast.

Dundracon is a full-on con, with board games, RPG’s, Cosplay, dudes in armor hitting each other with swords, etc. It’s been in existence for quite a while as this was their 36th event!

The 40K tournament was a one day, 3 game, combined score system where your sports, appearance and generalship combined to give your total score. The player with the highest score was the winner.

I brought the Mighty Mighty Footdar out for this tournament as they are so much fun to play. Right when we pulled up though, I spotted 3 IG armies that would give me a lot of trouble if I had to play them. Luckily, that wasn’t meant to be. I still have never lost to IG with my Footdar, but I’ve never beat them, either! haha

As you can see, not exactly the typical Footdar list, but it I know it quite well and I really love to play the army. 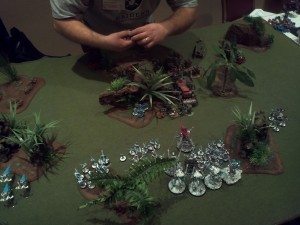 The Footdar fighting it out with an awesome looking Speed Freaks army.

Mission 1: Objectives: 3 objectives equally spaced across the middle of the board.

This was a very good game, and very close. The deciding factor was a large piece of impassible terrain slightly past the center objective in my opponent’s deployment zone. This allowed me to defend my deployment zone objective and to go after the middle objective and be out of LOS and charge ranges of many of his units.

His list was interesting, using Mad Dok Grotsnik instead of Ghaz. Mad Dok is really underrated, but still, I think Ghaz is all-around more useful. Snikrot and the Deff Koptas worried me though, as my army is relatively slow and asymmetrical assaults really hinder my deployment options.

The match boiled down to a game of cat and mouse behind the large impassible terrain piece mid-field, and I really used it to my advantage. It allowed me to keep his fast movers from coming at me all at once, and I was able to destroy or immobilize all of his mobility but one Trukk before they could get around it. This allowed me to block him from getting at my vulnerable infantry that held the central objective to earn me the win.

I threw out my Rangers as a bait squad to lure out his deathstar (Megannobz with Mad Dok) unit into the open. He took the bait, my ENTIRE army shot them and did 2 wounds total! Hahaha, but the Firdragons did manage to waste the Battlewagon. Luckily, the Avatar went in hot like a Boss and killed all of the Mega Nobz in HtH in a single round of combat.

Snikrot went bananas, coming in off the back board edge turn two and hitting my War Walkers (I was using them to screen my scoring units from a rear assault) and with 6 attacks he got 6 penetrating hits, exploding two walkers and taking out 22 infantry models, including his entire squad!

It was a great game, very close and literally came down to the last roll of the dice. 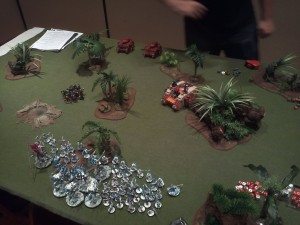 Taking on Raw Dogger and his Blood Angels

Mission 2: Modified KP. Monstrous Creatures, HQ, Tanks, ICs, count for one extra KP per category they fall into. For example, the Avatar and Eldrad were worth 3 each.

This was a bad match-up for old Raw Dogger. The mission and my army were just not good for him. Footdar tends to eat MEQ armies for breakfast, and particularly MEQ armies that are assault oriented. Eldrad owns Meph in a big way by shutting down his mobility, and Harlies and the Avatar walk through BA assault units like they were straw men.

Raw Dogger played ultra aggressively (perhaps a bit too aggressively) going hell bent for leather to try and deal me a killing blow. His plan damn near worked as my first round of shooting did nothing to him and Meph got a wings off to get him into charge range. Turn 2, he was assaulting my lines with Assault Terminators and Meph and went through my screening units with ease.

Unfortunately, that was exactly what I had prepared for, and my counter attack was brutal. I had positioned my screening models to make sure he wouldn’t stay locked in combat the following turn by pulling casualties in such a way as to be out of the Avatar’s fearless radius, giving me good odds that they’d run away after taking the charge which is what happened.

The Harlies then ate Meph, the Fire Dragons took out the Land Raider and the Avatar and a Wraithlord tar pitted the Terminators, killing most of them. Raw Dogger then tossed his Assault Marines into the melee to try and kill off my big Monsters.

Had he won that combat against the Avatar and Wraithlord (totally possible, considering the Avatar only went in with a single wound left) he could have then swept into my lines and it would have been a much closer game, possibly a loss for me. However, his dice crapped on him and I was able to throw the Harlies and the second Wraithlord into that combat as well, wiping the Termies and then leaving his Assault Marines on their own against overwhelming odds.

Tough mission/list match up for Raw Dogger and another victory for the Footdar.

Mission 3: Adepticon mission with 3 vicotry conditions, whoever had the most, wins. Both players could get every condition) Condition 1: Take out half of the opponent’s Kill Points. Condition 2: Have a unit in the enemy deployment zone. Condition 3: Have an HQ model within 6” of the table center.

This was a crazy difficult game! Tastey Taste and I have played this match-up before at a tournament, and I only won because one of his GUO’s misshaped TWICE! I was using every trick up my sleeve in this match-up and it came down to the last throw of the dice.

Nurgle type units with high toughness and FNP are a bear for me to deal with sometimes. And Tastey Taste plays this army very well. He deploys everything extremely aggressively and often, it is simply too much to deal with.

That is exactly what he did this time, and I was on the ropes most of the game. Tastey Taste’s saves were red hot the first few turns, and I was just not able to kill anything. He’d make 9/10 saves, 4/4 saves, etc. I thought I was going to get smashed and then my luck turned in later turns.

I was playing a fighting retreat most of the game, keeping real estate between myself and Tastey as his army closed the noose on mine, and I was running out of real estate to retreat into. I was sacrificing units left and right to keep him from pulling off some game winning multi-assaults. Then, in turn 4, my dice went hot. The War Walkers started cutting down daemons wholesale, and the Harlies went into Boss-Mode, and wiped out 4 units of Daemons by themselves, including a GUO! That saved my ass in a big way as during the heat of the moment, Tastey realized he had forgotten the mission objective and had gotten his HQs too far away from the central objective. The Harlies pounced on one and killed him before he could recover. Eldrad and the Avatar tag-teamed the other GUO, taking him out as well.

However, what won me the game was 2 units not killing things, but surviving. A single Dire Avenger survived an assault from 15 Flesh Hounds though sheer luck, preventing Tastey from breaking off and taking out my last War Walker. That War Walker then assaulted into them (better than letting them assault with Furious Charge) and he survived the last turn of combat too, immobilized with no weapons! Had Tastey gotten one more damage result, he would have gotten that last KP he needed to earn that victory condition.

When the dust settled, I had the KP objective and my outflanking Rangers and Jet Bikes got me the deployment zone condition, and neither of us had the HQ in the center condition. I won by the slimmest of margins in a really challenging, fun game.

So, I had a perfect record and had gotten 9 favorite army votes for my paint job, and got a really good sportsmanship score to give me the win with best overall! Nice!

So the Mighty Mighty Footdar overcome internet hate one again to grab a top spot. I love the army, such good fun to play. They do have some awful math-ups (Veom Spam and Leafblower) but against anything else they are rock solid.

I am contemplating taking a second squad of War Walkers and Harlies as they always kick butt for me. The Avatar was a Boss dipped in sauce this tournament too, when typically he only stands around looking intimidating and soaking fire. Playing against assault armies really gave him a chance to show his stuff.

My hat’s off to Geoff for running a great event, and to everyone who came out and had fun!

← Adepticon Bound and Down Part Deux
Signals from the Frontline will be a bit Late Today. →