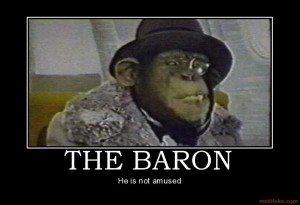 Almost as cool as the Dark Eldar Baron.

Hey folks, this is Vidar from Frontline Gaming writing to highlight a character in the Dark Eldar book that I consider an auto-include: the Baron.

Now to discuss the Baron I will have to initially talk about his troops.  The Baron is a hellion independent character that makes Hellions count as troops.  Now is this useful?  The hellions have all the normal Dark Eldar abilities like Night Vision, Fleet, Power from Pain, and a Wychsuit. What makes them different is that hellions are jump infantry equipped with splinter pods which are an 18” assault 2 poisoned weapons.  That gives them an effective 30” range with these weapons on a jump platform.  In close combat they are equipped with hellglaives which grant the hellions with +1 strength and a +1 attack.  That’s 2 strngth 4 attacks per hellion w/ 3 on the charge.  The skyboard gives them a +1 to their armor save for a massive 5+.  They have both combat drugs and Power from Pain adding to their lethality through a range of special bonuses from Feel No Pain to strength or attack bonuses.  In fact the only one that is not AS useful is the 3d6 on the run since with these troops you will probably want to be shooting every turn, although making that crucial assault when you need it can be game winning.  Finally, they have Hit and Run which I find always brings a wealth of tactical options with it. Ok, that’s not too bad, but is it great?  Yes, but not without the Baron.

So what does the Baron bring to a troop of hellions?  A helluva lot, that’s what.  First, he brings a phantasm grenade launcher, a 20 pt savings which gives his troops offensive and defensive grenades. Eh, so-so with a unit that isn’t a dedicated assault unit, but those defensive grenades are priceless when they get assaulted by some sneaky assault unit, or when they need to stand their ground on an objective.  Next, his skyboard gives him +2 to his strength when he assaults which when added to his Hellglaive means he is strength 6 on the charge before Furious Charge bonuses.  Add in his shadow field this kid can hold his own in most combats.  Not shabby, but not amazing.  What really sets the Baron apart are the next 3 abilities.

First, the Baron has Bones of the Seer which, besides the awesome back-story, adds one to the die roll to decide deployment zones.  That’s a 16.6% chance to choose your side and probably go first.  Combine him with Vect and you have a roughly 90% chance of going first and gaining that all-important Alpha Strike, which for a properly built Dark Eldar list, can be game winning.  That’s pretty boss.

Second is his Twilight Shroud, which gives the Baron and his unit Stealth.  Hold on.  He and his unit of troops all get a +1 to their cover saves?  With the abundant 4+ terrain in 5th edition you can plant these guys in a fire lane at 18” and punish dismounted enemy infantry.  Better yet, moves these onto an objective and sit them on an objective ignoring dislodging fire for 5-7 turns and score an objective.

Lastly, and perhaps the coup de grace in utility is his Master of the Skies ability.  This expansive special ability gives the Baron and his unit the capability to reroll dangerous terrain tests allowing the hellion lord and his unit to jump in and out of that valuable 3+ cover save terrain with almost guaranteed success to not lose any soldiers (1/36 to lose one).  As if that weren’t enough, the Master of the Skies allows the hellions to also reroll the Initiative test and distance moved for a Hit and Run.  So these guys can almost assuredly escape in the enemy’s assault phase and be in a position to shoot, assault or just steal an objective on turn 5.  No big deal.

Ok, so a rundown.  Here is a 105 pt character that unlocks a jump infantry troop choice that is pretty great at destroying infantry and not bad at taking on Light Armor.  Take 14 hellions plus the Baron (for an easy 15 hellions or 3 boxes for sale at the store).  They move 12” onto a mid-field objective shoot at a dismounted infantry unit with 30 poisoned weapons killing (28*2/3*1/2*1/3+ the Barons BS 6 shots) 4 MEQ.  Not great but if they are within assault range well that’s an additional 42 attacks at strength 4 plus 5 strength 6 attacks before combat drugs or Power from Pain from the Baron, plus whatever special weapon you choose to give the Helliarch, and you can easily take on most non-dedicated assault units.  That means that the next turn (that would be your enemy’s turn) you will win that combat, roll a consolidation move, then be able to move, shoot and dominate on your turn with a Pain Token in your pocket, taking objectives and laughing like a maniac (as any good Dark Eldar player, should!).

So, we here at the shop have discussed this unit, the Baron and 14-15 hellions, a lot, and it is definitely a great all-around unit for taking and holding objectives and chewing through infantry units.  His Bones of the Seer ability changes games.  His price-tag is negligible and having a 17 wound 3+ cover save troops choice with a 30” shooting range and a possible 24” assault range makes the Baron a great HQ choice for the Dark Eldar.

← Signals from the Frontline: We Discuss Puppets War Models, Urban Mammoth, Gw Releases, and Kromlech Models
Adepticon Bound and Down →

4 Responses to “40K Dark Eldar Tactics: The Baron and Friends”