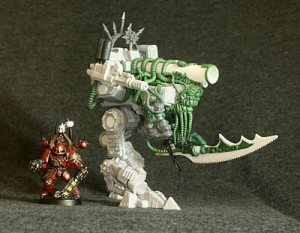 Get Some, dogs of the false Emperor!

Here we have a guest piece from Green Stuff Industries, for more info like this, check out their blog!

My Defiler kit bash had a problem: it was bringing two knives (each a former chainsword) to a space-aged gun fight.  The knife in the right hand I was good with, I think it had the proper look and feel.  The one in the left hand?  Not so much.

That Defiler needed a large and crazy close combat weapon to go with its squirmy tentacles.  Something that just looked Evil (pronounced “Eee-vil”).  Unfortunately, I had no large bits in my boxes that fit the bill.  I toyed with the idea of buying a GK Dreadknight kit just for the sword, but that seemed excessive.  Unfortunately, the closest I have to a “before” picture is directly below; I just got so sick of looking at the lameness that was the left hand weapon I clipped the thing in the hope it would force me to make something else. 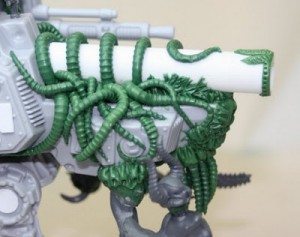 This knife problem bothered me for about a month until I got inspired by cheese.  The knife I was spreading the cheese on my crackers with was made of plastic!  Why, that’s the same stuff my 40k models are made of!

So here I will outline how I turned the humble plastic knife into an ultra-deadly Dreadnaught close combat weapon of the 41st millennia.

Making these weapons without a high-speed rotary tool (Dremel) will be extremely difficult.  I would imagine all of this can be done with an Xacto and a set of files, but it would take an extreme amount of time and patience.

Not only will you need the Dremel, but go with the Dremel you’ll need a cutting wheel, an end mill, a large and a small ball mill, and likely a drill bit small enough for pinning.  By the way, the mills are also called “engraving bits” in case you go looking for them.  You’ll also need a permanent marker, small files, some coarse and some fine sandpaper and at least a few plastic knives.  You’ll also need a pair of safety glasses to wear when you do your Dremel’ing.

Before you start working, test to make sure that the glue, the primer, and anything else you’ll be using that has to stick to the weapon will actually stick.  Take a spare plastic knife and try to glue it to some spru.  Wait for the glue to completely cure and take that glued knife-spru and primer it.  Then stress test the whole thing; bend it, scratch it, see where it breaks. Seems silly, but I only thought of this halfway through my build and if the glue or the primer didn’t work like they were supposed to, I’d have been super pissed at myself for the wasted work. 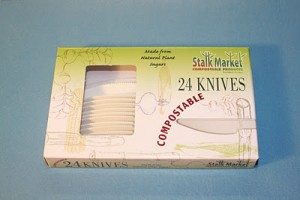 I lucked out because the knives we had on hand are vegetable based plastic.  Specifically, they are made by a company called Stalk Market out of natural plant sugars.  The reason this is good, aside from being “green,” is because petroleum based plastic that is food-grade is typically made to be extremely durable, is fairly brittle, and very smoothly finished.  These properties can make working, gluing, and painting the material very difficult.

Once you find a suitable knife, preferably with serrations and a nice curve to the cutting edge, you’ll want to mark out what modifications you’ll be making.  The plant plastic was great because it was white and a standard permanent marker marked it up very well.

I can’t stress this enough: draw out what you want to do to the knife before you do anything! Don’t wing it!  It doesn’t have to be art, but those simple marks help you get everything cut the way you want.  My markings were very rough, as you can see, but they gave me a guide to judge my progress against.

When the knife was marked like I wanted, I started in with the Dremel.  The most important thing to know about using a rotary tool like a Dremel is that it relies on speed to do the work, not power (torque).  Using too low a speed can cause the bits to grab and damage the work piece or stall the motor.  Unless you’ve used a Dremel a lot, I’d recommend you practice on some of the other knives, first.  High rotary speed, smooth motions with your hands, and a little practice can make a project like this go pretty smoothly.

I used the cutting wheel to create tabs on the back of the plastic knife blade.  I then used the ball mills to weaken the base of the tabs so I could break them off without worrying about busting the knife itself.

I could have just cut the tab bases, I suppose, but I didn’t want to press my luck.  I figured it only took one slip of the tool to screw the whole thing up, so just take it slow and easy.  Minimize any chance for my clumsiness to get in the way.

Once the tabs were broken out, I used the end mill for smoothing out the edges of the cut areas.  High rotary speed is critical when it comes to working thin bits of plastic.  If you’re trying to put a point on a sword and your bit grabs, it’s either going to chew up the material badly or just break the point off completely.

I also needed to cut the butt end of the knife off.  This presented me with a problem: how to do that and not make it look like I just cut the handle off of a plastic knife?  I hit upon the idea that the bottom edge of what would ultimately be the guard of the sword should have a pointy bit.  That, and I’d hide the plastic knifey parts with a liberal application of green stuff.  I made some more grooves with the a ball mill and broke the knife handle off.  Then did some extensive smoothing with the end mill.

The next step for me was to make a place for the Defilers hand to grip the sword.  I did this by drilling out holes with a 1/8” drill bit and my giant pin vise.  Those holes allowed me to then smooth the opening out with the end mill.  After that, it was a simple trim-to-fit on the hand. 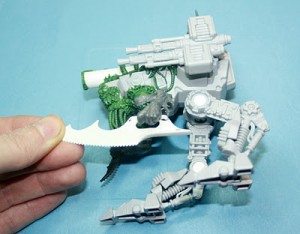 It’s a PITA, but I pin everything I can when I do a modification like this.  I knew I’d be slathering on the green stuff later, but a little reinforcement couldn’t hurt. 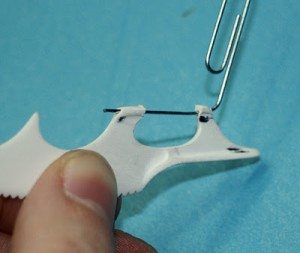 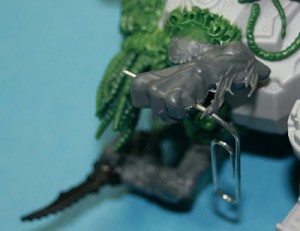 I did learn that if you have to drill through a good distance (like that hand), a high speed rotary tool is not what you want.  The speed causes heat where you began drilling and the heat melts the plastic.  The pin-hole through the hand is considerably larger than I wanted at the entry point because the heat had time to build up while I was finishing the hole.  Luckily, that part of the hand is covered in green stuff now.  If you can, use a pin vise or an actual drill for distances through plastic of greater than 0.250”.  Don’t get lazy, like I did. 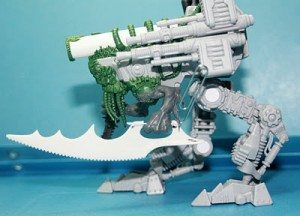 With the pinning done, all that is left to do is get artistic with the green stuff.

On the use of Green Stuff

Using green stuff for the last year or so has taught me two very import traits: patience and moderation.  The green stuff work you see on that sword took me 4 days to complete but it was only about 2 hours of actual work.  There are at least 16 destinct sculpted sections on that weapon. 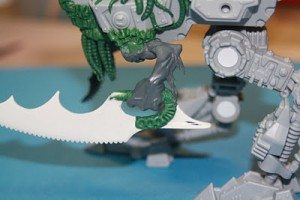 I used to get super excited about what I was doing and let that feeling get the better of me. I’d mix a giant ball of green stuff then work and work and try to complete the entire job before the ball cured.  I’d constantly get fingerprints in parts I just finished perfectly.  I’d throw out grape-sized balls of hardened green stuff all the time.  That lack of patience wasted more of my time and green stuff than I care to think about.

Don’t get me wrong, I still get excited by what I’m doing, but now I mix little bits of green stuff, sculpt only that small part, then step back and let that cure before I lay down the next part.  Patience keeps the clumsy fingerprints out of the sculpts.  Moderation keeps me from rushing the job and wasting materials. 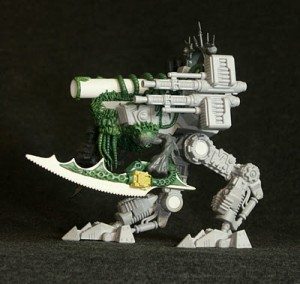 I know this Defiler is considerably smaller than the GW model and is therefore nowhere near “legal.”  I think I would need both a very forgiving opponent and a liberal TO to be able to play this thing anywhere outside of a friendly game.  All that aside, it’s one of my favorite conversions.  I’m really glad I didn’t let the rules dictate what I could create.  It’s been my experience that many players will just be happy to play against an interesting looking army. So, just go crazy!

You can buy those tentacle makers at Green Stuff Industries’ website. Rich makes a ton of awesome conversions, we’ll be sure to get more of them for you to see, soon!