40K Army Blog: All-Marines (Help Will decide how to finish his Marines)

You are here: Home › 40K › Editorial › Modeling › 40K Army Blog: All-Marines (Help Will decide how to finish his Marines)

This is going to be a on going article on my “All Marine” army. For those of you that don’t know what I mean by this, it’s a marine army that I can use for any codex I choose. A lot of people hate on these kind of builds, but I must say it saves a lot of money and saving money is always good ;). It also gives me a lot more use from the army, and allows me to build a crazy amount of points and not feel bad about it.

I’m still not sure what I want to name the army, or fluff behind it. I thought I’d do something along the lines of what Reece did with his Space Marines and his Native American build. I think that is pretty sick. But as of now I’m going after a futuristic German WWII paint scheme.  Just the colors of course, not any of the Nazi ideals.  I’m using pig iron helmets on all my infantry. My characters are mixed matched bitz from varies amounts of different units and specialty bitz such as the Chapterhouse studio eagle wing shields.  I’ve also shaved off all the icons on everything to help keep the generic theme going.

So far my army is using a Blood Angel build. But seeing as though the black templar codex should be coming out soon I may have to try that out! haha. I’ve never been one to hop on the bandwagon but F it, the Black Templar’s look awesome.

Anyways, What I’ve got so far in my build.

4x- Rhinos/razorbacks of the las-plas sort. (We all buy Razorbacks and convert them to be Rhinos, too)

All the predator weapons are magnetized. 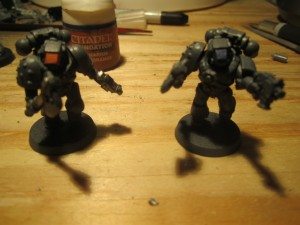 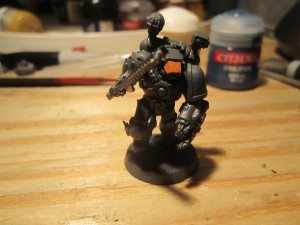 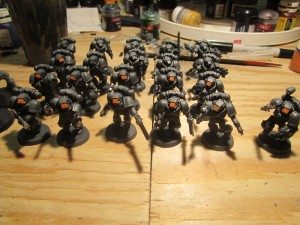 The assembled marines, ready to take up arms from any codex!

11 Responses to “40K Army Blog: All-Marines (Help Will decide how to finish his Marines)”

Leave a Reply to Kingpin