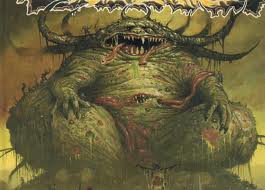 Frankie’s back with another article about his Plague Marines.

This week I will be going over some good and bad match ups for the hordes of the Nurgle Chaos Space Marines.

So first I will talk about the positives, which would have to be armies that are not made for spamming ap1-2. My favorite match up is probably the new Necrons because they don’t have too many weapons that ignore my three up armor save and four up feel no pain. Also the new Necrons are not great in close combat, which is perfect for my army because my boys are all toughness five with two attacks and will not die to normal attacks. The poor Necrons don’t stand much of a chance when faced against my highly resilient army and strong close combat units like my deamon princes. The only thing I really have to worry about are Mind Shackle Scarabs. Another really good match up would have to be Orks because they don’t have too many long rang guns and cannot eat threw my toughness five and feel no pain. I love getting matched against Orks because I know it’s going to be a blood bath in the center of the table; always a great game! An okay match up would be anything with high rates of fire but not too much of a punch in close combat. Armies such as razor Spam Blood Angels, Eldar, and most space marine armies. These armies are for sure not push overs but are a bit easier than the top tier armies at tournaments.

Now I will go over the bad match-ups at tournaments for my heavy hitting Chaos Space marine army. The first bad match up would probably be Mech guard; with their heavy rate of fire my army usually doesn’t make it across the field. But on the odd chance that my transports survive 1-2 turn I can actually do work to the weak guardsmen when I make it into their lines. Guard is a bad match up but not an automatic loss like some of the other codex’s, but don’t get me wrong I never give up… I always die with honor! A worse match up would be the mighty missile Wolves because there firepower is just so ridiculous it tears up my armor in one turn and kills all my guys in two turns. It’s especially bad with Bjorn as he increases their odds of going first to roughly 75% which is totally sad face for me because they only need two turns to shoot me off the board. Not much of a chance when missile Wolves get placed down in front of me but I will charge forward very honorably to die and hopefully gross them out when my guys explode into pus and guts. Now onto the worst match up of all time to my army: the lame Grey Knights who are good at everything. Close combat, shooting and anything else you name. Grey knights rape all my high toughness guys because they can increase their strength to five: lame. Their psycannons can tear apart my light armor tanks and can rend all my plague marines down. Whenever I get paired against Grey Knights it’s usually an auto loss unless I get super lucky. Even with that match up, like I’ve said, I never give up.

I still believe that Chaos Space Marines are a top tier army and I will back that argument up 100% on the table top. I hope you guys enjoyed the article and hope to play against some of you in the next tournament season!

← Big Bird and Friends: Fatecrusher Daemons Tactics: The Flying V
To Tier or not to Tier, that is the Question. →