40K Editorial: The Best Part of this Hobby 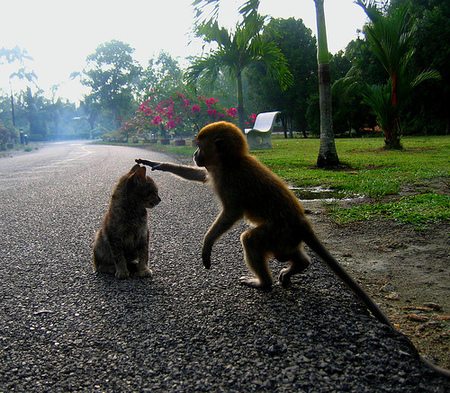 Making friends is the best part of this crazy hobby of ours.

There’s a lot to love about our bizarre little niche hobby, but this is definitely the best.

In a hobby that is world wide, but has a tiny community thanks to the internet, we often see rivalries flare up, and big egos that tend to dominate the hobby landscape.  When you combine that with the anonymity the internet provides, and how easy it is to misinterpret what someone is saying when you lack the verbal cues that speaking to someone in person provides, it is easy to think that this is a pastime filled with negativity. In the search for the perfect list, or the best combo, we often get caught up in the competitive aspects of the game and can forget what got us into in the first place.

Most gamers don’t go to big events, or spend far too many productive hours cruising the internet. Most gamers play with a small group of friends in their local area and just have a laugh tossing some dice and enjoying what this game is all about: having fun.

I recently got a letter from a friend I made at Adepticon: Henrik Lampén. Henrik was a member of the (notorious) Team Sweden, a group that made the trip all the way from Northern Europe to partake in the Mecca of Wargaming. They were a great group of guys, very fun, positive, and all very good players. Henrik and I both made it to the second day of the event to play in the finals, and we drew each other game 6. Henrik was playing a Space Marine list that looked like something you would see from the pictures in the Codex against my trim-all-the-fat Bjorn Wolves.

It didn’t look like it’d be much of a game to me, and I honestly wondered how he had gotten as far as he had with his list and knew he must be damn good.

We played a great game. I was trouncing Henrik but he never gave up, despite seeming to be getting smashed. The, in the last turn, all but 1 of my 15 Long Fangs missed and Henrik somehow, someway, managed to win the game! It was a crazy turn of events and a great display of tenacity on his part to beat me when it looked like all hope was lost.

We both parted friends having enjoyed a really great game together.

Fast forward to now, and I get this email in my inbox from none other than Henrik:

Hello!This is Henrik, your opponent from Adepticon, game … 6? I think. I am the Swedish dude who played Ultramarines and somehow magically managed to pull of a win in the critical turn during our game. (I’d be the first guy to admit is was the dice who made it. But, as I use to say, -if you have bad luck in the first turns, it often changes in the end game… 😉 )
I really enjoyed our game, and I must say that the sporting attitude you showed during our  game is still in my memory. So, I want to give you some credit to the enthusiasm I have for travelling across the atlantic to play 40k. I did spread the word about how nice it is to play against americans, and as a result, – we have doubled the amount of swedes for 2012! Yeah, that’s right, 8 swedes are visiting adepticon next year! I hope I will meet you in Chicago, Reece. I like what you have accomplished with Front Line Gaming, and I wish you all the luck in the future!
Will I see you in Chicago?
Sincerley,
Henrik
That right there is why I play this game. To hang out with old and make new friends. I play to win, for sure, I am competitive by nature, but more important than that to me by far is the friendships I have made with people all around the world. People I would have never met otherwise.
At the end of the day, winning a game really doesn’t mean anything compared to an enduring friendship. I hope that anyone who reads this gets an idea of just how fun these big tournaments can be. Are there some crappy people there? Sure, but just avoid them. 99% of the people you meet are nice, fun, and there to share a common love of the game that you have.
Make the trip! It’s worth every penny of the money to go and be a part of these awesome, community building events. Plus it gives you the chance to meet a lot of the people you talk to or read about on the net and see that they are just regular people in real life.
So game on, everyone! And have fun making new friends.
Reece

6 Responses to “40K Editorial: The Best Part of this Hobby”