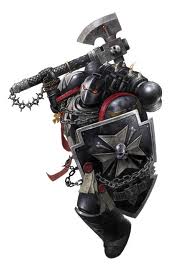 These rumors come compliments of Davon over at www.dakkadakka.com

So since I don’t go there very often and come here alost everyday, lets discuss about the BT here. If by any chance there is a BT rumour page and I missed it, can anyone direct me to it please since I don’t see one.

Ghost has said that BT are due out before Tau, presumably the next codex. He also said

due to them sitting done for nearly 8 months?… n honestly sword brethren are nice

I believe therefore that the Black Templars should have their own rumor thread rather than cluttering up the other rumor threads. I invite Ghost, as well as any others with information to share to post it here.

First update (thank you for the advice Shabbadoo)

And thank you ghost21 for these rumors!

kits for sword brethren n nophytes(sp) as ive said im more of a xenos guy but ill provide what i know, vows are less restrictive

i also saw things for something called knights of the inner circle (or something along those lines).. they were named each came from a successor chapter, n the guy who lead them was a bt… it was interesting but as usual salt applies

Not as big! But more bizarre! (unless you play fantasy…). That’s most of what I know about it. Speculating from that – big buffing thing with a howdah ?!

A bit more for now – in regards to the ‘neophytes’ (if they continue with that name), I heard they were finecast. Whilst it would leave room for another plastic kit, I hope this isn’t true.

Dark Angels are not at all on my radar, doesn’t mean they aren’t happening anytime soon, but I haven’t heard a thing, if ghost’s heard anything it is likely to do with black templars.

4. CSM will get one of the newest dexes in 6th, right after the Marine dex.

5. Tau and BT will get a release soon after CSM; other races updated in 5th will not be updated in 6th as their rules (at least from Guard onwards) are allready suited for 6th. Ward will probably do the BT and might do Tau as well. DA will probably not be updated anytime soon, because its not a popular army and GW does not want to waste money updating one or more armies that almost no one plays with a separate dex.

Old rumor from Jordankeeps at DakkaDakka

“Phill kelly is going to write the Bt codex, so that should be great oh and new units added for bt as well. by Jared van Kell

A little but nothing solid. What I have heard.

– Phil Kelly is writing the Codex.

– More emphasis on the horde aspect of the army with lots of large units of Initiates and Neophytes.

– Emperors Champion is more in line with the company champion of the Grey Knights but is still 2 wounds. Gains preferred enemy against independent characters and monstrous creatures.

I will let you know as I hear more.

– I forgot to mention the Rightous Zeal rule could be changing to be more along the lines of the Rage USR. Something along the lines of if they fail a Ld test then they are subject to Rage and must advance towards the nearest enemy unit. As yet the details are sketchy.

Sword Brethren are to get a special rule where when they are assaulted the enemy unit has to re-roll all* successful hits, at the expense of 1 attack. It’s called “parry”.

Land Raiders, when suffering a 5 or 6 on the damage chart* (so “wrecked” or “destroyed”) gets one more turn where it rampage, think along the lines of the machine spirit going bezerk.

No horses as far as I am aware, bikes would be the direction (if any at all) for riding knights.

There is a named Emperor’s Champion, he’s meant to be the longest living EC in the Black Templars history, or somesuch.

*I’ll seek clarification as it doesn’t quite seem right in my head.