The following comes compliments of Kroothawk over at DakkaDakka who has compiled this information from www.heresyonline.com and www.Warseer.com

We will be digging further into these rumors in our next podcast coming Tuesday, November 29th, so stay tuned form more details!

First a necessary disclaimer: Rumours about an upcoming Codex Tau Empire come up every now and then, the last summary on the Heresy Online forum predicting an August release this year. Harry thinks that Tau are still farer away than most people think. Ghost21 has a reputation of providing loads of rumours, with most dealing with the far future, one being spot on (Dreadfleet) and one being far off (Augst release of Sororitas models, with detailed description of the released models). So I present a summary of ghost21’s Tau rumours (he is the only source) as provided by Warseer’s Tastyfish, but I can’t guarantee the reliability and personally remain sceptical until at least some more of his rumours turn out to be true. And I will edit ghost21’s spelling and grammar as always

I will try to keep this first post updated. Again thanks to Tasytfish for providing the original summary which I just reorganised a bit (and will probably expand in the future).

Edit: Added some stuff including rumours by other posters. Harry also estimates a tau release just before 6th edition. Frgt/10 thinks all miniatures are done.

Not the next book, but probably after Black Templars

Author may be Phil Kelly

No Court of the Archon/henchmen type mixed units

Ethereals may get increased BS and preferred enemy.

New sniper suit (seems to be the snipersuit mentioned below)

4 new ‘Tau’ units: Note these will not all probably be in the first release – there’s 2-3 plastic kits here and we already know 3 for the 4 that are coming out.

Dropship (carries up to 15 models or 2 battlesuits and 10 models, or 5 battlesuits)

The Ubersuit is a Battletech/Mechwarrior sort of thing (probably Dreadknight sized), with a special ‘ridiculous’ ability that lets it rain down shooting if it stands still.

Crisis suits have been completely redesigned (not just recut sprues and ankle tweaks), less boxy and including a ‘morphic weapon’

Hammerhead and Skyray stay the same.

Vespids get two slots. They get a heavy version (in addition to the assault unit) with some sort of heavy weapons. 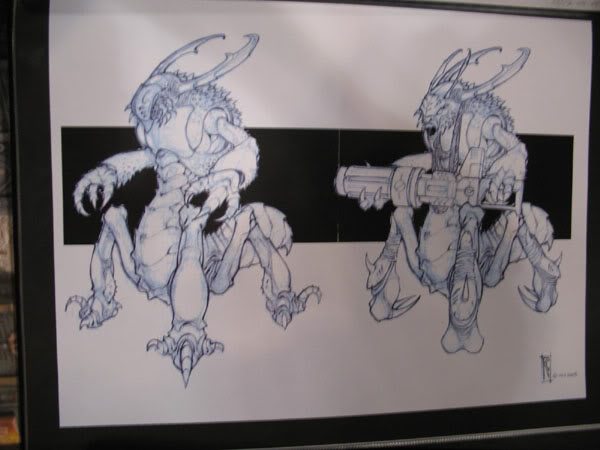 Kroot get an additional unit

Demiurg have 1 HQ, 1 troop and maybe 1 else. Presumably the Elite choice mentioned elsewhere

Demiurg ancients are a thing Probably HQ, but could also be the elite unit

Demiurg Ancients: Think of them as cranky old wise men who saw the Imperium in its infancy. They have seen the Eldar come and go, and thought it was just another decadent empire, though they normally take hundreds of years to make a decision. The tau have something special the demiurg like.

Demiurg are “equal to banshees without the scream” so presumably anti-armour close combat, or at least have that as an option. This might also be elite unit rather than the troop one, or be a unit that does both – like a kit that would let you make Boyz and Ard Boyz (or Dwarfs and Longbeards). An elite unit, but being an upgrade to a troop slot to keep out the way of the battlesuits.

Demiurg are apparently a lot less Dwarfish than the initial concepts, instead being more like little stone golems (Ozruk from WoW was mentioned)

As a tongue in cheek nod to the fate of the squats, there is a named Demiurg (who may or may not make it as a SC) who survived fighting Tyranids and personally killed a large monster by drilling his way out after being “Swallowed up by the ‘Nids”

This Demiurg is aware that the Ethereals have some kind of power over the Tau (maybe other races too) but not the Demiurg, who have presumably signed up for political reasons and of their own free will

Demiurg and one other new race join the army, the latter being something bizarre or at least something we’ve not seen before.

They have plans for this guy from an old concept sketch: 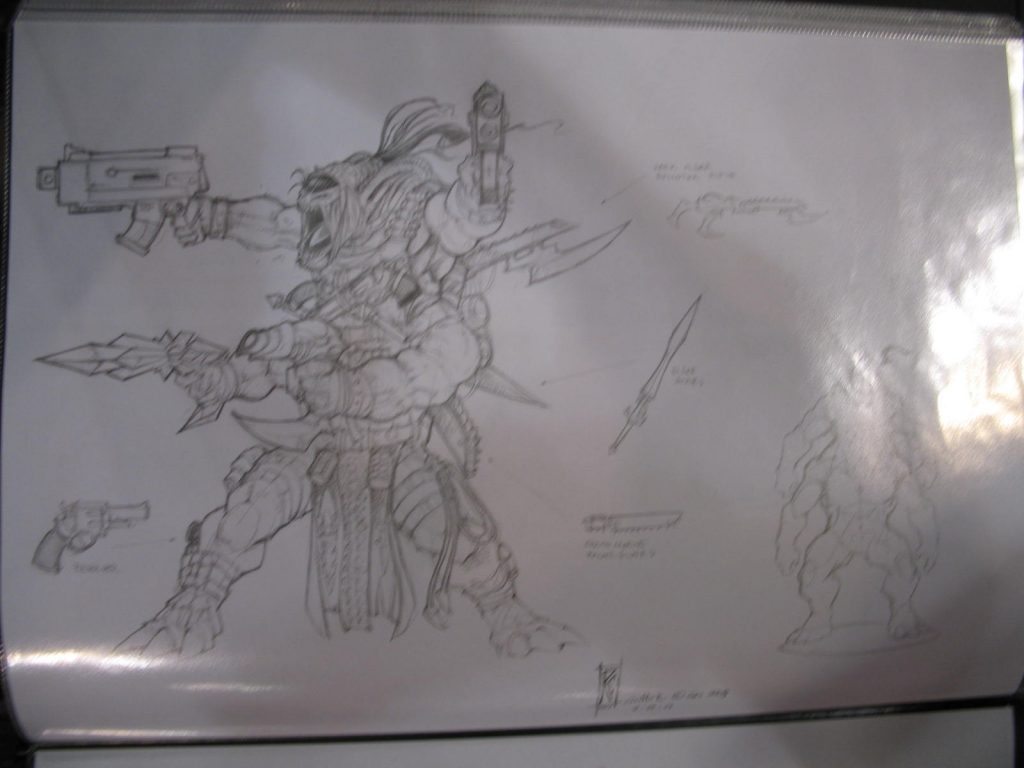 Rumours not by ghost21:

The Man They Call Jayne from Second Shere forum http://secondsphere.org/index.php/topic,129654.0.html :

I have heard a few rumours for the GW high up through a mate. His source is GWs own Phil Kelly, who has just started work on the Tau Codex.

1.) 6th ed boxset is set to be Eldar Vs CSMs, as they will be the among the first 6th ed codexes.

2) Eldar will be first, then Tau or CSMs

A new “Insectoid” Tau Aux race. Thats all I know on that bit though. Not niccasar it would seem.

Forgeworld stuff is moving across too. TX-42 and Hazard. Maybe even the Remora.

All the new Tau models are done; Dave Thomas worked on them for roughly 18 months and he’s finished them all now.

They’re just waiting for a releases slot, I don’t now when that is but my guess it is has since been locked in since I found out this info.

Dave has been working on something pretty big. (Helpful as always. )

Also Frgt/10 is correct in that Dave Thomas has been exclusiely on Tau for 18 months but he is not 100% correct. Whilst MOST of the models are done. My understanding is Dave Thomas still had some bits and bobs to do. (i am guessing finishing characters?)

But even so that means they could be in the next six months.

(But I am not expecting them quite this soon).

also Harry I heard down here that he was 100% done with them, hence why he was in oz for GD. Or have you heard otherwise in the last month or so?

I don’t know when they are released.

I just said six months could be possible.

I have them for the early summer in my, constantly updated, release schedule as the release right before 6th Edition

New Heavy support platform. Basically immobile deep striked! heavy weapon and crew. Rail and Ion Cannon, and missile launcher are all obvious options here, but nothing solid with the rumor.

Assault Skimmer. Something between size of piranha and hammerhead, fast skimmer open topped, assault on disembark.

Update: Yes, its assault after a flat out move, and has the “drop troops along path” option similar to the storm raven. its supposedly a dedicated transport option for one new unit. (I don’t place faith in this last bit, its very rare in current GW systems to see a vehicle kit limited to one unit/role…if GW is trying to sell them they will be available to more than one unit, or be a separate entry unto itself.)

New Drop ship. Not the FW one, but something new. Holds a boatload of fire warriors, or a few battle suits.

New battle suits. Not sure if these are the “next gen” suits or just heavy suits redone with out metal bits.

During a mooch around one of the better known Independent Games shops in the UK I was told that GW are no longer accepting orders for Tau stock indicating that a release is proably imminent. So guessing the traditional WFB/40K pattern following Necrons there will be some WFB goodies followed by Tau in the new year.

The bloke who told me was a blowhard so season as appropriate, but the owner corroborated it so I thought that I would put it out there.

Here some old pics from 2008 of sculpted models, unsure if they are released though: 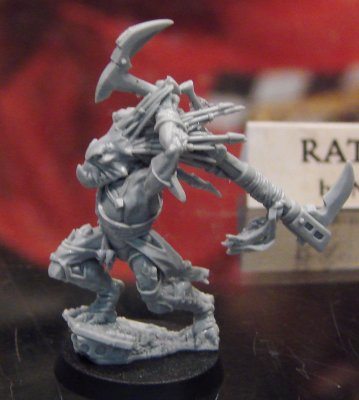 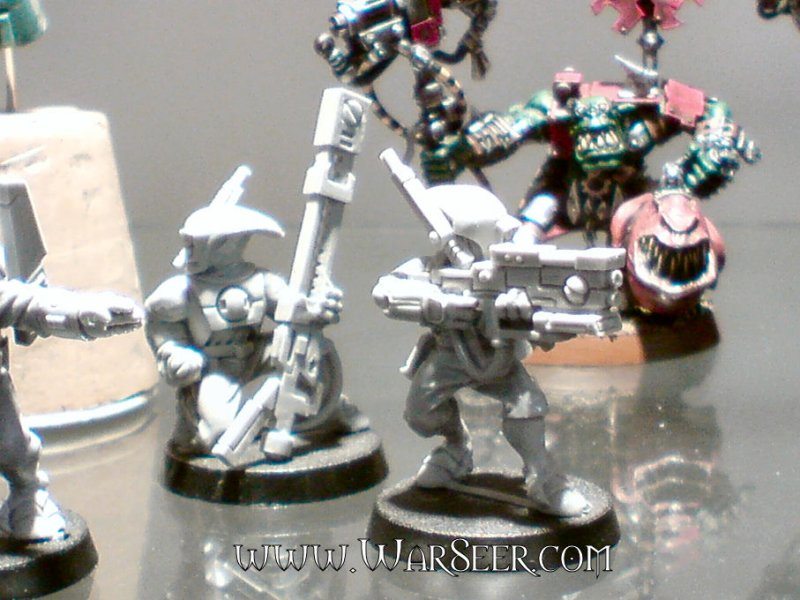 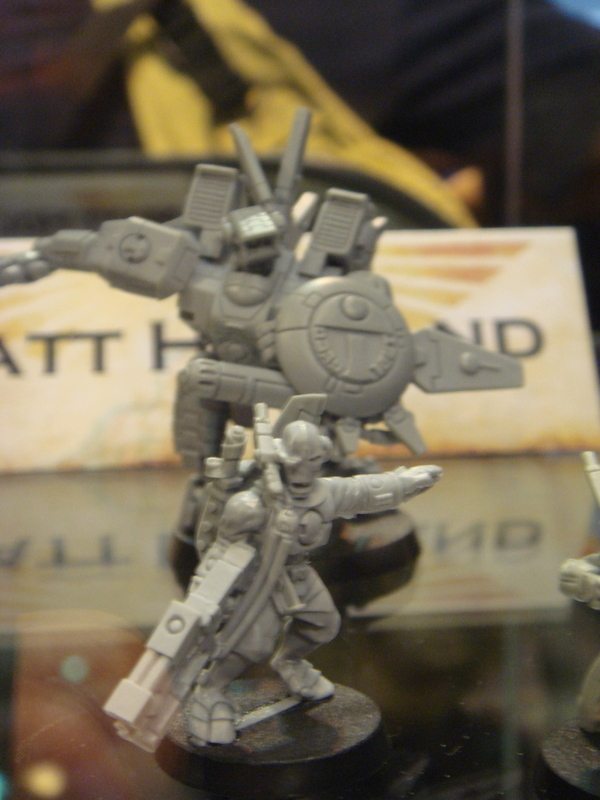 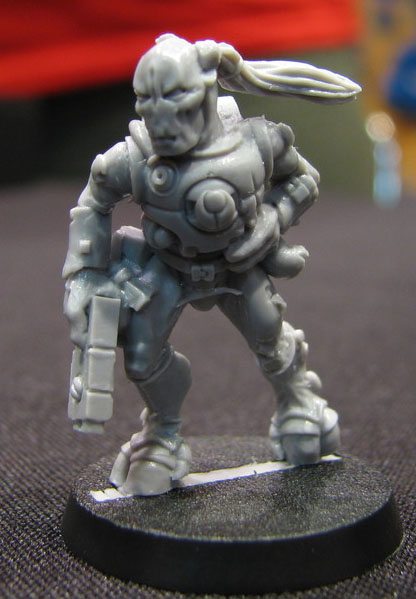