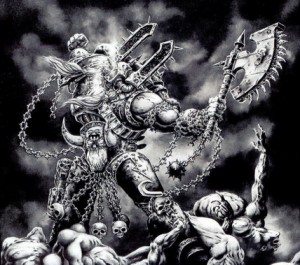 Here are the rumors of which I speak: http://www.dakkadakka.com/dakkaforum/posts/list/410529.page

This is all fantastic news to me. As a long time hobbyist, and a lover of the game’s setting, it warms my heart to see that the game designers are going away from the bland, boring current Chaos Codex (albeit effective on the table top: PM/Oblit/Lash still gets it done).

Back in the days of yore, Chaos was an amazingly fleshed out, awesome force in the game’s story. There were lesser gods of chaos, some of who were actually “good,” or at least seemed that way. The major gods were so much more complex and interesting than they are now. Khorne was not just an angry god of angriness, but a god dedicated to martial prowess. His followers could just as easily been Samurai style warriors as Berzerkers. The background was rich, and multi-faceted, geared towards an adult audience. There were layers of complexity to it that gave it a depth seldom seen in gaming worlds. This is a large part of the reason 40K has been such a successful franchise.

In the transition from 2nd edition to 4th, we’ve seen a dumbing down of the game and it’s background. The fluff cross-hairs seemed to have been slowly aimed form grownups to children. GW has an open strategy of recruiting new gamers, as they spend more in a year than veterans tend to, and this seemed to be reflected in the content of their product.

It seems now though, that they may be realizing that a more mature game setting has a broader appeal, and that even children can appreciate nuance and complexity in a game, even if they don’t understand it. I think back to stories I loved as a child, and sure there were lots of simple, black and white morality tales, but the ones that stand out, that stayed with me over the years, were those that had depth to them. Lord of the Rings. Star Wars. Novels by Asimov, Heinlein, etc. A lot of it did go over my head, but I got the “feel” of it, and that was enough to keep me coming back for more.

Hearing that 40K may be heading back to where Rick Priestly originally set the game can only be a good thing, in my opinion. It will bring more players in, and just as important, keep them there.

Hearing on top of this, that we will have rules for each of the original 9 legions of Chaos is just awesome. I can’t wait to see what this means. I hope it brings us specialized legion-specific units, non “generic” lesser and greater daemons, and special characters that unlock the force org chart, or grant army wide abilities or play styles to Chaos lists just as the Marine special characters do for the Space marine dex (which, IMO, is the best Codex written. Balanced, with multiple viable builds, flavorful, and fun). The possibilities are truly limitless, and GW would be remiss to not fully take advantage of them. It is a fine line to not give us another game breaking 3.5ed book, but please, please, give us the variety and flavor that a true Chaos dex deserves.

As for the Renegades book? Chaos Guard? Mutants? All I can say is: about freaking time. That is a gold mine of ideas and models that GW has just let pass them by. Just as an Adeptius Mechanicus army would be like printing money, a Lost and the Damned book with all the trimmings would be incredibly popular, and add so much to the game. Most of the Black Library novels feature traitor guard in some way, and they are integral to story of 40K. Let’s have them on the table top!

Lastly, with Daemons, I hope to see some major overhauls to what is a great army. It is full of character and brings the warp to the table-top. The Sci-Fi/Fantasy mix of 40K is a huge part of its appeal, and Daemons really bring this to light. Fighting creatures from myth with laser wielding undead robots from space is just cool to nerds like us. Daemons bring us this feel, but the army needs some work. They are still competitive with a few builds, but on the whole, they are difficult to play and random. Let’s see an army that doesn’t have to deep-strike, but can. That alone completely changes the dynamic of the book; but I digress. This isn’t an article about rules wish-listing, but some thoughts on what the Chaos releases could mean for 40K.

Here’s to hoping that GW delivers the goods. I am sure the models will be amazing, as all of the recent releases have been. I just hope we see rules like Space Marines and Dark Eldar, where the army actually plays like they read in the fluff, with multiple, viable builds to boot. Lets please not see more Tyranids or Grey Knights, with grossly imbalanced or game breaking rules, heavy-handed fluff and few viable builds with units that are clearly over or under powered. A tall order, to be sure, but one I sincerely hope to see fulfilled.