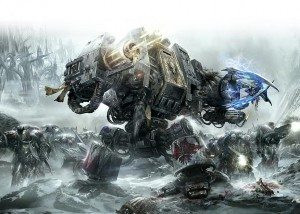 This is an article I wrote for Blood of Kittens a while back about the mighty Bjorn! My Bjorn Space Wolf list has served me well, winning me several tournaments including: SoCal Smackdown 3, Best General at the SoCal Slaughter in Space, winner of Ard Boyz Round 1 and 2 2011, Winner of Da Grand WAAGH! 2011, 4th place at Adepticon 2011, and a slew of RTTs. Despite conventional internet “wisdom” saying he isn’t worth his points, as I often find to be the case, you can make a winner out of a “bad” unit when used correctly.

Bjorn is often seen as the red headed step-child of the Space Wolf codex. My response to that: Have some respect for your elders!

Bjorn has been kicking ass in the Emperor’s name since before the Emperor took up permanent residence on his Golden Throne. He is the ultimate old Bull in the pasture, bringing thousands of years of experience and martial prowess to the field. Plus, he’s just cool.

Fluff aside, Bjorn’s rules can bring a lot to certain Space Wolf builds. At first glance, he seems to be overcosted. 270 points is a hefty price tag for a model that can be taken out with a single shot. The initiative 3 means he swings after younger and spryer Dreads. No option for a Drop Pod means old man Bjorn has to hoof it everywhere he goes.

In an assault based Wolf list, he really doesn’t have a place, IMO. But in a shooting list I feel he is the superior choice to Logan Grimnar’s Loganwing List for one very simple reason. Bjorn gives you a 75% chance of going first. What this means is that with an alpha strike shooting army, you have an enormous advantage over your opponent, particularly against other shooting armies. You enter into a war of attrition were every turn your enemy has less and less to hit back at you with. With a properly constructed shooty Space Wolf list, within two turns you should have total ranged warfare superiority, forcing your opponent to come at you or play defensively.

In order to make the most of Bjorn’s ability, you want to maximize the amount of long range firepower, and unique units you pack into your list. Long Fangs—the best unit in the game at the moment, IMO—Typhoons and Razorbacks are your best allies. These provide cheap, mobile (apart from Long Fangs, of course) platforms for long range firepower. They also mean that you can set up in anticipation of losing the initiative and still move into position to fire at full effect turn 1.

Having a large number of unique units means you can target all of your opponents units and at least stop them from shooting back at you. Since most of your units are relatively fragile, this is very important. This also means your opponent may not have enough units to target all of yours, increasing each unit’s survivability through target saturation.

Bjorn also shoots decently. I run him with the Plasma Cannon as with his BS6 he rarely misses what he shoots at. The Plasma Cannon gives you an answer to heavy infantry that your missile launchers may struggle with. His Heavy Flamer is also nice for clearing light infantry.

I have found Bjorn to be very good in assault; surprisingly so. With WS6 he hits nearly anything on a 3, and with 4 strength 10 base attacks, he can put a serious hurt on anything. I run Bjorn with 2 more Dreadnoughts, each with a twin linked Las Cannon and Heavy Flamer. These units provide more ranged fire power but also double as counter assault with Bjorn. Dreads are great for tying up units such as Blood Crushers, Hordes of Orks, Berzerkers, etc. that really scare your squishier light shooting units. I have had Bjorn walk right through 30 man mobs of Orks with little trouble. His AV13, 5++ invulnerable save and Venerable status (force your opponent to reroll the damage dice) makes him one tough old bastard. Twice, I have had him kill Mephiston in single combat at a tournament. Combine him with a Jaws of the World Wolf Rune Priest to both give you Psyker defense and the ability to snipe Klaws and Fists out of a squad means Bjorn and his Dreadnought crew can safely engage units and tarpit them.

What I have found to keep Bjorn and his buddies away from are Monstrous Creatures with a high In, Ork Vehicles with Boarding Planks, Seer Councils and obviously units with a large amount of Melta Weapons. Monstrous Creatures with a high In and lots of attacks such as Trygons can rip him apart before he swings by throwing so many dice on the damage table. Even with a reroll, the old guy can only take so much. Seer Councils with Fortune just soak up Dreadnought Close Combat attacks and they have strength 9, In 5 attacks to throw at Bjorn, which equals bad. Boarding Plank Truks and Wagons are rough too, as they can reach out with strength 9 attacks at great speed and Bjorn can’t swing back. The obvious answer to these issues is to shoot those units. One, or even two meltas don’t scare Bjorn much, but 3 or more means that some will sneak past the invul save and even a reroll on the damage table won’t be much use if there are two dice only needing a 4 or higher to kill him.

Bjorn dying and becoming an objective or giving up D3 kill points is almost never an issue for me. In the 4 tournaments I have used him in so far, he has only died twice. Each time was an objective mission and each time I secured him as an objective, meaning in dying he helped me to win the game. If you are running your army so that each element can provide support to others, Bjorn should never be in a position to be destroyed off on his own. In a shooty list with lots of threats, all of which are easier to kill than Bjorn, I find he rarely gets shot at. His lone Plasma Cannons isn’t worth the effort to kill him for most opponents. They’d rather take the easier kill of a Speeder or Razorback.

Lastly, never forget Bjorn has Saga of Majesty and a Wolf Tail Talisman. The Talisman rarely comes in handy as not many psychic powers work on vehicles, but Saga of Majesty is great. Typically your shooty wolves will hang tight and throw massive amounts of strength 8 and 9 weapons down range. Bjorn can stay near the Long Fangs and allow them to reroll any morale checks which can be game saving. This also keeps him in a good position to defend against outflankers and assault units who will most often be aiming for your Long Fangs.

So give the old man a try. He may remember Abaddon as a kid with a lot of potential and refer to the Emperor by his first name, but Bjron still brings the thunder on the table top.

One Response to “Space Wolves Tactica: Bjorn the Fell Handed”